It’s seen as swelling/ bulge when an organ inside the body protrudes through a weak spot in the wall of the cavity.

Hernia is a bulge caused by the tissue pushing through the wall of muscle that’s holding it in. Most hernias are abdominal hernias. This means they happen in the belly and groin areas.

You may have a hernia if you can feel a soft lump in your belly or groin or in a scar where you had surgery in the past. The lump may go away when you press on it or lie down. It may be painful, especially when you cough, bend over, or lift something heavy.

Femoral hernias sometimes appear as a painful lump in the inner upper part of the thigh or groin. The lump can often be pushed back in or disappears when you lie down. The lump may appear while you cough.

Femoral hernias can be repaired using surgery to push the bulge back into place and strengthen the weakness in the abdominal wall.

The exact cause of hernias is unknown. Straining of femoral canal muscles will lead to hernias, few of the factors lead to overstraining of muscles are listed below:

This is a medical emergency and you need to approach the doctor or emergency care immediately. 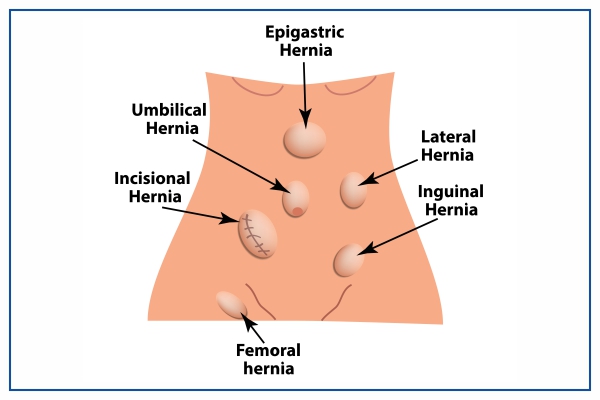 Obstruction: This is a complication where a section of the bowel becomes stuck in the femoral canal, causing nausea, vomiting and sometimes stomach pain, as well as a painful lump in the groin.

Strangulation: his is a complication where a section of the bowel becomes trapped and its blood supply is cut off; this requires emergency surgery within hours to release the trapped tissue and restore its blood supply, so it doesn’t die.

There are 2 ways of repairing a femoral hernia, which is the following:

In this type of treating option, the surgeon will do an incision and the lump will be pushed back into the abdomen. Once the procedure is done, it will stitch the incision and the patient will be moved to post-op for observation.

Laparoscopy or keyhole surgery refers to a surgical procedure with minimal incision. The surgeon will do a few small incisions which allow the surgeon to use various special instruments to repair the hernia. As the name indicates the incision will be in the size of a keyhole.

Most people make a full recovery from femoral hernia repair within six weeks, although many people can return to driving, work and light activities within two weeks.

An umbilical hernia occurs also because of the intestine or the other tissues form inside the abdominal cavity bulge through the weak region around the belly button. About 20 percent of babies are born with an umbilical hernia.

If at all if the umbilical hernia does not close even when the child is at the age of 4 years, then it will require treatment.

The main cause of umbilical hernia is because of not completely closing off the umbilical cord region after the delivery.

However, there are a few factors which cause the umbilical hernia, which is listed below:

Umbilical Hernia will have a small bulge near the umbilicus (commonly called as naval). Generally umbilical hernia is not painful for babies but however, parents may feel discomfort if the hernia is large in size. Below are a few symptoms:

Age: infants, especially those preterm babies have a higher risk of having an umbilical hernia

Coughing: Chronic cough will be a major risk because the force of coughing applies pressure to the abdominal wall.

Being obese: Obese children and adults have a significantly higher risk of developing an umbilical hernia, compared with individuals of normal weight for their height and age.

The hernia cannot be treated with medication. Open or Laparoscopic surgery is recommended for the repair of a hernia. Various techniques of repair with sutures/anatomical repair & mesh are available for surgical treatment of hernias. Surgery can be planned if the hernia is not associated with any complications and risk factors.

Generally, the umbilical hernia will be closed automatically when the baby grows up. Doctor suggests for surgery when:

Umbilical hernia surgery is a small procedure where the bulge is pushed back into place and to make the abdominal wall stronger. In many cases, the patient can be discharged on the same day. The surgeon makes an incision at the base of the belly button and pushes either the enlarged lump or bowel back into the abdomen. Muscle layers are stitched over the weak area in the abdomen wall, which strengthens the layer. Sometimes, the surgeon will place a pressure dressing, which remains as it is for 4-5 days.

The only complication with umbilical hernia surgery is if the blood supply is completely cut off, there is a potential risk of gangrene and life-threatening infection.

An incisional hernia is a hernia usually occurs at or close to the surgical incisions that were made from previous abdominal surgeries. It occurs when the incision which has been made in order to get to an internal organ such as the appendix or intestine or other tissues fails to heal properly with the time. Incisional hernias are very common when compared to other types of hernias. Approximately 33 percent of people who undergo abdominal surgery will experience an incisional hernia. They are most likely to occur within three to six months after surgery but can happen even after years or at any time. Most of the time, an incisional hernia occurs along a vertical incision.

The most common complications from an incisional hernia include:

When to seek emergency medical attention when you already have a Hernia?

An incisional hernia will not heal on its own without surgery. It can be treated only through surgical intervention. The treatment for an incisional hernia will be determined based on multiple factors such as the patient’s general health, anatomy, location, and extent of the hernia and desired level of physical activity in the future

It is a type of hernia in the epigastric region of the abdominal wall. It is just above the belly button and just below the sternum of the rib cage.

It is common in both adults and children (infants also). About 2 to 3 percent of all abdominal hernias are epigastric hernias.

Generally, a bump is caused in the area below the sternum, or breastbone, and above the umbilicus (belly button). This bump is mainly caused by a mass of fat that has pushed through it.

The bump will be visible all the time or only when the patient cough, sneeze or laugh. This bump, or mass, can grow and become larger in few cases.

There is a chance of having one or more epigastric hernia at a single point of time.

This mainly occurs when the tissues in the abdominal wall don’t close completely during development.

The complications for an untreated epigastric include the following

It is a condition that occurs when the upper part of the stomach protrudes into the chest cavity through a small opening in the diaphragm known as esophageal hiatus. It occurs among people who are over 50 years old.

Though these are very common and do not usually cause any major problems.

There are two types of hiatal hernia, that include: Sliding Hernia, paraesophageal Hernia.

Sliding Hernia: As the name implies, it occurs when the junction between the stomach and esophagus slides up through the esophageal hiatus. This happens during moments of increased pressure in the abdominal cavity. The stomach falls back down to its normal position with gravity when the pressure is relieved.

Paraesophageal Hernia: In this type, there is no sliding up and down, but a portion of the stomach remains to get stuck in the chest cavity.

The main cause is the increased pressure within the abdominal cavity. The suspected factors that contribute to abdominal pressure and development include:

Most of the individuals with small Hiatal hernias do not experience any symptoms. But, large Hiatal hernias can cause a variety of symptoms related to gastroesophageal reflux. These include:

Though complications are rare, they might happen and can be serious. The most common complication while having this is to have acid reflux which is a backup of stomach acid and other contents into the esophagus. This results in heartburn, which can get worse after having heavy meals or while lying down right after eating.

Most cases do not show any symptoms, so no treatment is required. The need for the treatment of the condition is determined by the presence of the symptoms. It is treated based on the symptoms either through medication or lifestyle changes or surgery.

If an individual with has acid reflux and heartburn, the treatment would be as follows.

The doctor may prescribe medications that include:

Lifestyle and activity modifications include:

The recommended dietary changes include:

Treating hiatal hernia by performing surgery is rare in cases in which the symptoms aren’t controlled by medications and making lifestyle changes.

The types of surgery to treat include:

There are various approaches to perform these surgeries which include:

It occurs when tissue which is a part of the intestine, comes out through a weak area in the abdominal muscles. The resulting bulge can be painful, especially when you cough, bend over or try to lift a heavy object.

It is not necessarily dangerous. It doesn’t improve on its own, however, and can lead to life-threatening complications if left untreated. The doctor may recommend surgery to fix it that is painful or enlarging. Repair is one of the common surgical procedures.

Common signs and symptoms include

There will be no particular cause for some inguinal hernias. Others might occur as a result of the below causes:

Pressure on surrounding tissues. In men, large hernias can extend into the scrotum, causing pain and swelling.

Incarcerated hernia. If the contents of the hernia become trapped in the weak point in the abdominal wall, it can obstruct the bowel, leading to severe pain, nausea, vomiting, and the inability to have a bowel movement or pass gas.

Strangulation, can lead to the death of the affected bowel tissue. A strangulated hernia is life-threatening and requires immediate surgery.

Few factors that contribute to developing an inguinal hernia are listed below:

Tips to avoid the development of Hernia?

Book an appointment with our Best General Surgeon

Make an appointment just in few minutes - Call Us Now