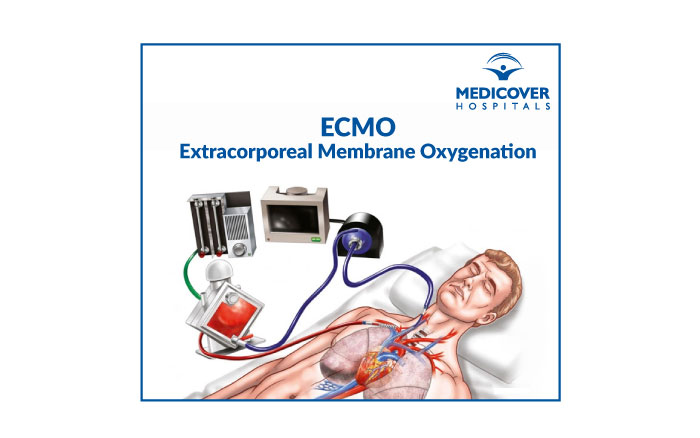 ECMO stands for Extracorporeal Membrane Oxygenation, which is a life-support machine that helps to pump and oxygenate the patient’s blood outside the body. The ECMO machine mimics the functionality of the human heart and lungs to temporarily replace the cardiopulmonary function of the patient in critical illness. This helps to relax the heart and lungs which speeds up the healing process.

ECMO is a life-saving procedure that helps the heart and lungs to heal, but it’s not a cure for lung and heart diseases. ECMO machine works by extracting blood from the patient and pumping that blood through an artificial lung, exchanging oxygen and carbon dioxide, then sends the blood back to the patient via a pump that takes over the work of the heart.

Why is ECMO used?

ECMO can be used in any age-group from infants to adults who are in the critical conditions of the heart, lungs, or who are recovering from heart transplantation.

Some heart conditions in which ECMO can be used include:

Some lung conditions in which ECMO can be used include:

How does ECMO Machine work?

The ECMO machine is connected to a patient through plastic tubes called a Cannula into large veins and arteries in the leg, neck, or chest. ECMO Machine works by removing blood from the patient and pumping that blood through an artificial lung, replacing oxygen and carbon dioxide, then sends the blood back to the patient via a pump that takes over the functioning of the heart.

What are the different modes of ECMO?

ECMO is used in two different ways depending on the patient’s requirement: 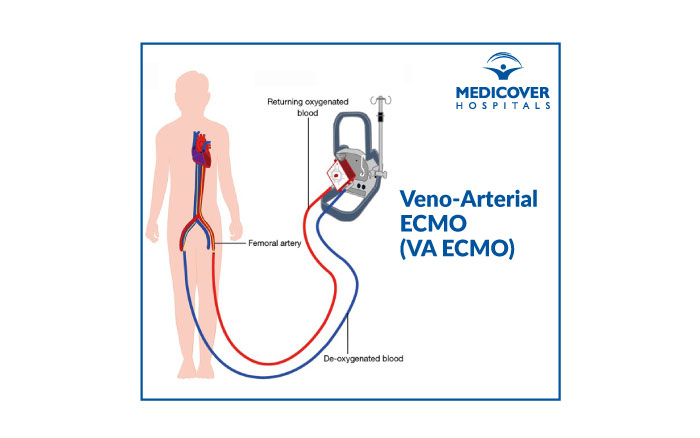 Veno-Arterial ECMO (VA ECMO) is one type that supports both lung and heart function. Two cannulas are placed one in a large vein and the other in a large artery, on the side of the neck, directly into the chest or in the leg. The ECMO machine will take the blood out of the vein, add the oxygen and remove the carbon dioxide, and then return the blood to the artery and pump the blood through the body. 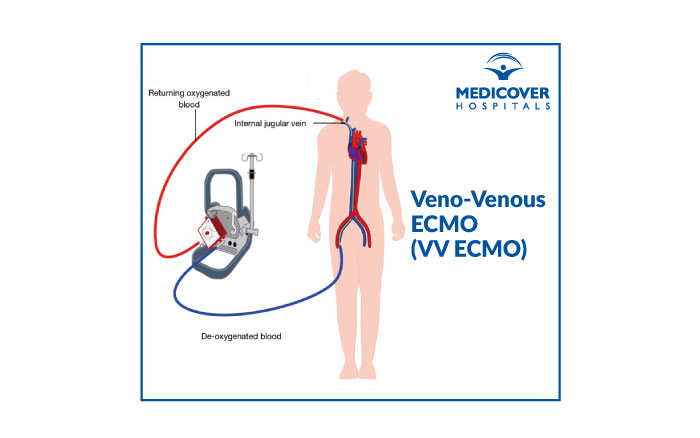 Veno-Venous ECMO (VV ECMO) is another type that only supports lung function. One or two cannulas are placed in large veins on the side of the neck or in the leg. Whether to place one or two cannulas depends on the condition of the patient. It pumps blood through the heart to arteries that carry the oxygenated blood to organs and other body tissues, so that the lungs get enough rest and recover soon.

What happens to patients while on ECMO?

What are the risks of ECMO?

Though ECMO is a life-saving procedure, it can be associated with few risks due to its complexity, which includes:

ECMO is a complex yet life-saving procedure that potentially benefits the patients in critical conditions. However, the success rates of ECMO depend on the severity of the patient’s health condition that has led to the need for ECMO. The doctor will explain to what extent the ECMO can be helpful according to the patient’s condition.